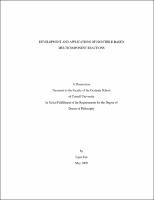 Multicomponent reactions provide simple and convergent paths to structurally complex products in atom-economical fashion. With the emergence of combinatorial chemistry and high-speed parallel synthesis, MCR chemistry has experienced a resurgence of interest in the past two decades. However, the application of MCRs is still largely limited by the relatively small number of such reactions. As part of our effort to synthesize new molecular frameworks by using the 'single reactant replacement' (SRR) strategy to evolve existing MCRs, we have explored the chemistry and reactivity of several alpha-substituted ketones (sulfonyloxy, acyloxy, azido, halo, hydroxyl and sulfonyl) in the two most utilized isonitrile-based multicomponent reactions, the Passerini and Ugi reactions. Guided by SRR, highly convergent routes to oxazoline, beta-lactam, di-O-acylglyceramides, and other molecular frameworks were developed. In a relative rate study, each of the alpha-substituted ketones underwent Passerini condensation more rapidly than the parent ketone, which was consistent with the expected enhancement of carbonyl electrophilicity caused by electronegative substituents. Using the Passerini reaction, a multicomponent approach was developed leading to photolabile caged neurotransmitter, 7-(N,N-diethylamino)-4(hydroxymethyl) coumarin (DECM) caged gamma-aminobutyric acid. Another caged neurotransmitter, DECM caged carbamoylcholine chloride, was synthesized in a highly convergent one-pot process.