A Neurogenetic And Comparative Analysis Of Courtship Song Production In Drosophila 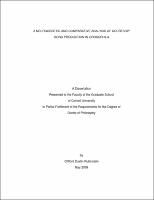 Courtship behavior studies in the genus Drosophila have led to progress in understanding how innate behaviors are neurogenetically programmed, and strive to understand how these behaviors evolve. Courtship song in the Drosophila genus is extremely diverse and widespread, and plays an important role in courtship success. Courtship behavior is believed to be sex-specifically programmed throughout central nervous system of male D. melanogaster. Courtship decisions in the brain indeed are sex-specifically programmed, but it was not clear if this is true for courtship motor patterns as well, such as courtship song. Evidence provided here suggests the song circuit itself is sex-specifically organized, requiring expression of the male-specific form of the sexdetermination gene, fruitless (fruM), in the song circuit itself. When lacking fruM in the circuit, fewer males are able to sing, and those that do exhibit disrupted song structure. However, the critical aspect of song temporal structure remains intact. Hawaiian Drosophila exhibit an extraordinarily diverse array of courtship song signals. However, it was not known if auditory receptors in these species were sensitive to these signals. Multiunit neurophysiology presented here suggests that D. heteroneura and D. silvestris can indeed hear conspecific courtship song. Further, D. heteroneura courtship song signals have been generalized to be used in an aggressive context. The foundations of an experiment extending the role fruM in the song circuit is presented. This experiment is designed to identify neurons requiring fruM for song production.