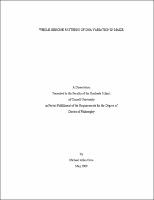 Genome-Wide Association Studies (GWAS) offer the potential to resolve complex traits to a single gene or an individual polymorphism. GWAS, which rely on historical recombination for resolving complex traits, require that regions of active recombination be genotyped at high-density. Therefore, the molecular focus to the maize (Zea mays L.) genome is to genotype the gene-rich or low-copy-number regions, as these are the preferential sites for meiotic recombination. Due to the rapid rate of linkage disequilibrium decay in a large, diverse genome, it is possible that several million markers are needed for GWAS in diverse maize. The integration of gene-enrichment approaches and high-throughput genotyping platforms offer the potential to score polymorphisms at the needed scale in an efficient and cost-effective manner. The two initial studies focused on developing methodologies to identify and score polymorphisms in large, complex plant genomes. In the first study, four geneenrichment and complexity reduction target preparation methods were tested for scoring polymorphisms on the Affymetrix Maize GeneChip. The results indicated that the tested target preparation methods offered only modest power to detect polymorphisms with the Maize GeneChip. However, 10,000s of informative markers were still discovered. In the second study, gene-enriched genomic libraries constructed for two maize inbred lines were sequenced using massively parallel pyrosequencing. This combined with a computational SNP calling pipeline designed to reduce the number of false positive SNPs resulting from paralogs lead to the identification of more than 120,000 single-nucleotide polymorphisms (SNPs). The third study used Solexa sequencing for low-copy-enrichment resequencing of inbred lines that are the founders of the maize Nested Association Mapping (NAM) population. More than 3 million polymorphisms were scored across the founders, and a substantial portion of the low-copy fraction was highly divergent or novel relative to the reference genome. Recent and ancestral recombination rates were strongly correlated with nucleotide diversity, which suggests that genome structure partly shaped diversity. In addition, we identified regions of the maize genome that are potentially selective sweeps or involved in regional adaptation. These results should be an excellent resource for GWAS, fine-mapping projects, and understanding maize diversity and evolution.