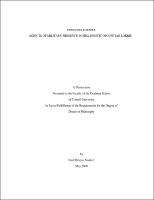 This dissertation evaluates the significance of fortification building in Opountian Lokris as a testimony to specific strategic demands made by the Successors of Alexander III of Macedon on her territory. I argue that there is a link between largescale movements of Macedonian armies, installment of royal garrisons in Greek cities and the construction of artillery fortifications on a trans-regional scale. I examine this newly-emerging reality by looking at military power as a productive force, one that was transmitted horizontally through complex networks, and on different levels. Chapter One, Geography and routes, examines the various ways trans-regional traffic by land and by sea impacted the local landscape. Based on literary, epigraphic and archaeological data, I contextualize the available evidence for routes and types of travel through a region that continuously served as a land of passage and a port of call for Macedonian military shipping. Chapter Two, Towards the military history of a terra incognita, traces the military developments based on a critical survey of the pertinent literary and epigraphic sources. Life after Alexander demanded new social strategies, since many communities had to put up with the presence of Macedonian garrisons. Chapter Three, A Gazetteer of sites, forms the empirical base of the dissertation. A site-by-site diachronic survey of the fortifications known from topographical studies and archaeological excavation helps measure the amount of change witnessed during the Hellenistic period. Chapter Four, Mapping urban phrouria, reexamines the issue of function by assembling the available evidence for occupation within the fortified area. The impact of Macedonian garrisons is surprisingly substantial, as reflected in the emergence of artillery fortifications, modern urban planning, new burial practices and foreign religious cults. Chapter Five, Phrouria Lokrika: construction, chronology and function, inquires into who benefitted from their construction. An attempt is also made to reconstruct and quantify the various stages of building. Comparanda from other regions of mainland Greece, including the Black sea region, deepen our understanding of what has been hitherto perceived as a strictly regional enterprise.