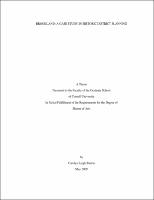 This thesis uses the Brookland neighborhood in Washington, D.C. as a case study to demonstrate that successful preservation and planning initiatives must be designed and executed to reflect the context of individual communities and neighborhoods. The debate over whether to support a historic district nomination in Brookland in 2005 provides an example of how outreach strategies for such initiatives can fail if they do not take into consideration the neighborhood?s political and social climate. In Brookland, many long-time residents have lived through years of fighting against outside interventions that do not necessarily put the interests of the existing community as the top priority. First and foremost, the Brookland community is well known throughout the city and beyond for the unified front of residents that fought for several years in the 1960s and 1970s to keep a freeway from running through the neighborhood, displacing residents and cutting off the neighborhood from points west in the city. The success of the Brookland freeway fight has effectively become a creation myth for the progressive, integrated, and unified Brookland, an image of which new and old neighborhood residents are proud. Since the freeway fight, Brookland residents have become known for their tendency to rally together time and again to make their interests known to the city and to demand for increased community involvement in planning and development initiatives. In 2005, a group of residents and non-residents associated with an unpopular community organization sought to propose a historic district nomination for Brookland and initiated outreach efforts for the cause. Opponents of the nomination were able fight against the historic district and its proponents by preying on well-known sensitivities in the community that developed during and since the freeway fight, including mistrust of the city government and outside interventions. The opponents were also able to take advantage of underlying racial sensitivities and fears of gentrification, exposing a side of Brookland inconsistent with the image of integration, stability, and solidarity of which many of its residents are so proud. Opponents of the nomination broke from the template of community unification and educated dissidence that drove successful activism in Brookland in the past. The opponents attacked people within their own community, labeling them as outsiders and conspirators, and spread misinformation to confuse and scare their fellow residents. To discuss the implications of the Brookland historic district debate, this thesis: develops the community context that has developed over years of community activism; presents past preservation activity in Brookland and the activities surrounding the proposed historic district nomination; presents the events of the historic district debate in Brookland in 2005; discusses the tactics of the opposition to the historic district; and relates the success and failures of the opponents and proponents to use the community context to develop their respective strategies. This thesis uses extensive primary documentation to develop the stories surrounding Brookland?s historic and present activism, including numerous interviews with Brookland and Washington residents, elected city officials, and city government staff, as well as a compilation of online forum postings from the Brookland listserv, meeting minutes, e-mail correspondence, and outreach materials from opponents and proponents of the nomination.