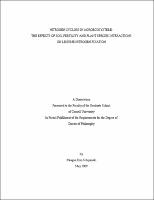 Legume-based cropping systems have the potential to improve nitrogen (N) retention and use efficiency in comparison with fertilizer-based systems, yet we lack an ecological understanding of biological nitrogen fixation (BNF) in these agroecosystems. My research objectives were to investigate: 1) the effects of legumebased management on soil organic matter (SOM) pools; 2) the effects of a SOM-based fertility gradient on BNF; and 3) how plant phenology and species interactions affect BNF across the fertility gradient. Research plots were established on grain farm fields in New York in 2004 and 2006. Fields represented a fertility gradient due to soil type and management differences, ranging from exclusive use of Haber-Bosch N to almost exclusive use of legumes. I estimated BNF of soybean (Glycine max), field pea (Pisum sativum), and perennial red clover (Trifolium pratense) using the 15N natural abundance method. Soil N pools were quantified ranging in microbial accessibility from extremely labile to primarily recalcitrant pools. Legume-based systems had greater quantity and quality of labile SOM pools, compared to fertilizer-based systems. I found weak evidence of soil N availability inhibiting BNF despite a more than 2-fold range in SOM pools across study sites. This suggests that N mineralization from SOM pools represented a much smaller N flux than N fertilizer levels used in past BNF studies. Complementary, facilitative and competitive interactions influenced BNF in species mixtures. Relay cropping of frost-seeded clover into winter grains increased clover % N from fixation due to the short period of competitive species interactions while retaining high biomass production due to the period of monoculture growth following grain harvest. The longer growth period of perennials may have increased their ability to respond to environmental conditions through feedback mechanisms. Perennial mixtures outyielded their corresponding monocultures and I found evidence for facilitative N transfer from legumes to grasses in perennial, but not annual mixtures. Monoculture red clover biomass yield was more stable across field sites than the other plant treatments. These results suggest that the integration of perennials and species mixtures into rotations could increase BNF inputs while also improving overall agroecosystem N cycling efficiency and yield stability.