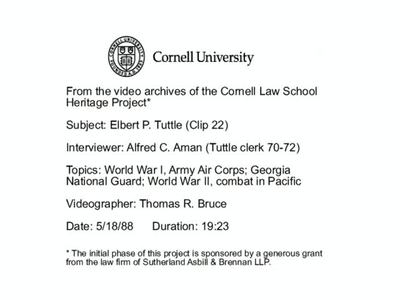 From the video archives of the Cornell Law School Heritage Project. The interviewer is Alfred C. Aman (Tuttle clerk 70-72); the videographer, Thomas R. Bruce. This video covers Elbert Tuttle's reflections his military service: his World War I training as an observer in the Army Air Corps, his decision to join the Georgia National Guard, and his combat experiences in the Pacific during World War II. (Duration 19:23) The initial phase of this project was sponsored by a generous grant from the law firm of Sutherland Asbill and Brennan LLP.