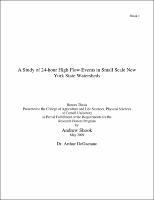 Small watershed streams respond rapidly to intense rainfall and can be an effective tracer for changes in intense rainfall climatology. Therefore, in this study of New York State's rainfall climatology, watersheds were limited to those with less than 150 square miles. In order to identify a trend in the data, stream gauges with a record of at least 40 years of continuous data were considered. Finally, gauges were used if they had location coordinates which allowed them to be mapped on Google Earth. Streams were then classified into urban, urbanizing, or rural urbanized categories. To identify the most intense events for each stream, an equation that would compute a flow index was derived and used to rank the events within a stream. Criteria for consideration included 24-hour events with at least twice the flow on the event day as compared to the previous and following days. This isolates the high-rate events that we are most interested in. Snow pack created an issue by contaminating the flood data. Therefore, only storms from April through November were considered, and the end months were checked for lingering snow pack effects. The top forty events for each site were ranked. There were no observable patterns between wet and dry years. This fact remained the same when the results were reproduced for the sets based on urbanization. When two sample sites were paired with rain gauges, a weak relationship between the heaviest rainfall events and the heaviest stream flow events was observed.