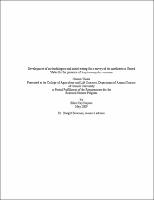 Angiostrongylus vasorum is a metastrongyloid parasite that infects the pulmonary arteries and respiratory tract of wild and domestic canids. Foxes serve as a disease reservoir and gastropod intermediate hosts and vertebrate paratenic hosts transmit infection between canids. A. vasorum infection is currently considered enzootic in areas of Europe, South America, Africa, and North America, and has become more common in eastern coastal Canada over the past decade. The only reported cases of A. vasorum infection in the United States were in a greyhound imported from Ireland and in a dog abandoned in Long Island. Since there is concern that A. vasorum may have spread to the United States from Canada, this project aimed to initiate a survey of the northeastern United States for the presence of A. vasorum. The heart and lung tissues of 14 foxes from northeastern New Hampshire were examined, but no A. vasorum worms were recovered. As a model for A. vasorum infection in gastropods, snails were infected with first-stage larvae of Aelurostrongylus abstrusus or Didelphostrongylus sp, two metastrongyles that also use snails as intermediate hosts. Third-stage A. abstrusus larvae were recovered from one successfully infected snail after snail tissue digestion in a pepsin/HCl solution. This project established a working PCR detection methodology, snail infection and digestions protocols, and a library of metastrongyle DNA to be used in testing methods for A. vasorum detection.