Dermatological Analysis of Wings From Bats With White Nose Syndrome 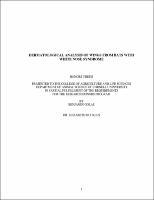 White Nose Syndrome (WNS) is an emerging disease that is killing hibernating bat populations in the Northeast U.S. It is characterized by an early loss of subcutaneous fat in hibernation, abnormal hibernatory behaviors, and white fungal growths on the nose, ears, and wing membranes. A collaborative effort is underway to find the cause in order to form a management plan to save the bats. To evaluate the pathogenic role of the WNS fungus, a new species of Geomyces, wing membranes were collected from 166 bats in New York, Vermont, and Missouri over a period from September to March. Each was given an independent objective score from 0 (absent) to 4 (severe) for amount of fungus, degree of fungal invasion, amount of bacteria, inflammation, and necrosis, and total score was calculated by summing these. Data showed that amount of fungus, degree of invasion, and consequently total score increased between October and December and remained high through winter to March. Amount of bacteria, inflammation, and necrosis had no obvious patterns over time. Only 14.3% of the time that necrosis and inflammation were present was fungus clearly associated with it. However, of the cases with necrotic and inflammatory lesions, bacteria were clearly associated 38.1% of the time. Furthermore, there was an apparent direct relationship between amount of bacteria and necrosis. This data suggested that the fungus is not the source of WNS, and that bacteria may be of interest as a causative agent.