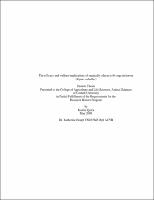 Domesticated horses are often stabled and thus their natural grazing behavior is limited. Consequently, some animals develop stereotypic behaviors such as cribbing, an oral stereotypy linked to bowel obstruction, lower learning ability, dental wear, weight loss and general loss in value. The present study tested surgically-placed "crib rings" for their efficacy in cribbing control and effects on welfare. Six adult horses with a long-term history of cribbing were used. Small hog rings (copper covered steel, 1-5/32" or 1-1/2") were placed into each horse's gums, between the upper incisors, under sedation with 0.1 to 0.2 mg/kg Detomidine. They were recorded 24 hours per day in the stall with a mounted camera and a time-lapse recorder and recorded grazing with a handheld video camera in five-minute intervals several times per week. Blood was drawn daily to test for plasma cortisol concentration. Horses were observed for several weeks before and after surgery. Average time spent cribbing and eating, average bites per minute grazing and average cortisol levels were calculated and compared using the student?s paired t-test with alpha-level 0.05. Horses spent significantly less time cribbing (P=0.002) and more time eating (P=0.002) post-operation. They also took significantly fewer bites per minute grazing with the rings placed (P=0.004). Cortisol levels were significantly higher (p=0.001) on surgery day but dropped by day one; there was no significant increase post-surgically. Thus, overall crib rings appeared effective in decreasing cribbing behavior. Four of the six horses, however, returned to cribbing due to loss or bending of the rings, thus long term efficacy is questionable. Increased post-surgical eating may have been a replacement for cribbing. Longer eating time and less grazing may also indicate discomfort; however, cortisol results did not indicate chronic stress.