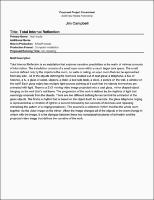 Total Internal Reflection is an installation that explores narrative possibilities in the realm of minimal amounts of information. The installation consists of a small open room within a much larger dark space. The small room is defined only by the objects in the room, no walls or ceiling, an open room that can be approached from any side. All of the objects defining the room are created out of cast glass; a telephone, a box of Kleenex, a tv, a glass of water, slippers, a chair, a bed side table, a clock, a picture on the wall, a window on the wall? Each glass object has multiple light sources pointing at it such that the objects themselves are animated with light. There is a 2'x3' moving video image projected onto a cast glass, mirror shaped object hanging on the wall (that's not there). The progression of the work is defined by the rhythms of light that seemingly emanate from the objects. There are two different defining forces behind the animation of the glass objects. The first is a rhythm that is based on the object itself, for example, the glass telephone ringing is represented as a vibration of light for a second followed by two seconds of darkness and repeating (mimicking the pattern of a ringing telephone). The second is a collective rhythm that ties the whole room together via the video image on the mirror. When the image changes all of the objects in the room change in unison with the image. It is the dialogue between these two conceptual structures of animation and the projected video image that defines the narrative of the work.