A biography of and interview with Lawrence T. Waitz 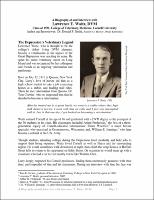 Matriculating at Cornell University at age 16, Lawrence Waitz completed his DVM degree too young to qualify for licensure in New York State. He spent the intervening months before his 21st birthday supplementing his formal education by working for established New York City and Long Island practitioners. Once licensed, he started a large animal practice in western Nassau County, where he served riding stables, racing and pleasure horses, and several dairies. When his asthma became so debilitating that he had to abandon large animal practice, he shifted his career focus to small animal practice, first in Nassau County and later in Suffolk County near the eastern end of Long Island. He retired from veterinary practice over 40 years ago, allowing ample time to develop new activities, notably painting and sailing. Now in his 99th year of life and living independently with his wife, Dr. Waitz is believed to be Cornell's senior veterinary alumnus.