A biography of and interview with Robert Ferber 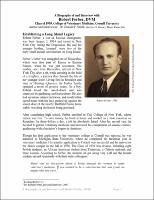 The son of immigrants who settled in New York City, Robert Ferber graduated from Cornell in 1939 and established one of the first small animal hospitals on Long Island. His brother, son, and grandson all followed in his footsteps, making his extended family one of the notable legacies in American small animal practice. With its inclusion of women, second-career students, Jews, Irish Catholics, an African-American, and even a Chinese national, Ferber's class was extraordinarily diverse for its time. Surviving a rigorous academic program during the Depression was challenging, but Ferber and his classmates drew strength from their mutual friendship and support, regardless of their background and core values. This is a story that brings encouragement and joy to animal lovers and veterinarians, and - indeed - to all.