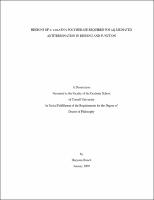 Controlled gene expression in phage Lambda is a model of transcription regulation which is mainly mediated by transcription factors to activate or repress E. coli RNA polymerase (RNAP). They switch appropriate genes on or off, determining the lysogenic or lytic pathway of progeny phages. Q is a lambda late gene regulator that exerts antitermination for products of the pR' promoter. Previous studies presented exciting aspects of lambda Q modification of RNAP which cause dramatic changes in the protein under certain conditions. RNAP engaged with lambda Q escapes a sigma-mediated promoter proximal pause and overcomes an intrinsic terminator downstream of the pR' promoter. In addition, lambda Q alters RNAP dynamics, aiding faster elongation, fewer pauses, and resistance to both the intrinsic and rho-dependent termination. Although lambda Q-mediated antitermination was characterized with previous works as described above, the mechanism by which lambda Q exerts antitermination is still unclear. In order to uncover this mechanism, this study attempted to answer the fundamental question of where lambda Q interacts with RNAP. First, the two largest subunits of RNAP were systematically dissected to map a lambda Q binding region on RNAP. The results suggested a clustered region of three fragments of beta and beta' for lambda Q binding, and as small as 82 amino acids (beta 600-681) within this region were identified to bind to lambda Q. Second, a potential lambda Q binding region of RNAP proposed by a previous study was evaluated in this study. Although the region is located in the surface domain of beta 600- 681, mutational analyses targeting the region demonstrated little lambda Q binding. Third, twelve RNAP mutants that reduce lambda Q-mediated antitermination were identified, and they suggested four spatial regions of RNAP as critical for lambda Q antitermination. Finally, one of the RNAP mutants, beta K1073G, presented altered function of NusA, a transcription elongation factor, in lambda Q-mediated antitermination at the intrinsic terminator, providing evidence of cooperation between NusA and lambda Q antitermination.