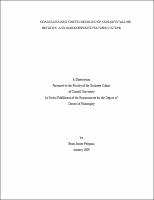 A coarse-grained kinetic simulation approach is used to better understand dynamics of entangled polymers during tensile strain experiments of a diverse range of polymer systems. Building on two previous meso-scale simulation models from literature, the polymer systems studied include semi-crystalline, polymer network, and nanocomposite systems. One of these models (Smith and Termonia) formulates the free energy of an entanglement network based exclusively on interactions between neighboring entanglement points and uses temporary bonds which break as the simulation progresses to recover a semi-crystalline stress response. Another method (Terzis, Theodorou and Stroeks) treats the coarse-grained units as delocalized polymer density clouds and formulates an expression for the free energy based on local polymer density. Both methods have been studied and compared to a simple model system, revealing semi-crystalline and soft rubbery behaviors with and without the temporary bond, respectively. Additionally, elements of the existing entanglement network models have been extended in the two following ways: (1) The temporary bond from Smith and Termonia's model is combined with the DCM framework to simulate rigid domains within a matrix of soft polymer network. The modulus of the additional bond sets the elastic properties of the rigid domain, and entanglement relaxation using the DCM assures local deformation remains consistent with the bulk polymer density. The effect of the size of rigid domain on initial modulus is reported. (2) Secondly, the role of entanglements in polymer networks is studied by employing different representations of entanglements, including non-affine tethering from theoretical models and the introduction of an entanglement bond potential acting internally at each entanglement. This potential mimics the non-affine tethering from network theories, and in combination with slippage shows qualitative agreement to Non-Affine Slip-Tube behavior. This polymer network framework can easily be extended to study various elements of polymer architecture, while incorporating realistic network behavior.