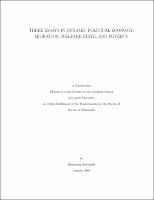 All observed government policies must pass through a political process. In many macroeconomic settings, the implemented policies affect the economy not only during the current period, but also the future path of the economy. In this dissertation, I investigate policies pertaining to immigration, redistribution, and poverty reduction. In the first chapter, I study how politics jointly determine the economy's redistribution and immigration policies. I develop a dynamic political economy model featuring three groups of voters: skilled workers, unskilled workers, and retirees. The model also features both inter- and intra-generational redistribution, resembling a welfare state. To analyze multi-group political economy equilibria, I extend the class of dynamic political games featuring Subgame-perfect Markov as its equilibrium concept. The analysis allows for strategic voting behavior, where voters may vote for a candidate not directly representing their group. Because the policy preference of the unskilled workers is the most intermediate, other groups may choose to side with this policy choice in order to avoid their least preferred candidate. For the unskilled workers, inequality plays a key role in determining the degree of redistribution. Therefore, immigration ultimately affects the generosity of the welfare state by altering the level of inequality in the economy. The objectives of the second chapter are twofold. First, the chapter tries to understand the relationship between immigration and asset prices. The analysis reveals that the asset price responds positively to immigration. The immigration's influence goes through four channels: increasing saving, increasing marginal product of capital, decreasing marginal cost of investment, and raising population growth rate. After the preceding analysis, I study how different cohorts will harness these benefits through political interactions. This exercise reveals that the young cohort may have a strategic motive to influence the identity of the decisive voter in the next period to ensure the highest return on their savings in retirement. In addition, the model also predicts that the uncertainty in the population growth rate of the immigrants will lower these immigration quotas. The last chapter moves away from international policy arena and focuses domestically on escaping a poverty trap. Prior studies conclude that redistribution is a futile policy against this vicious cycle of poverty. I revisit this line of literature and show contrary to this conclusion that redistribution can help the economy escape the poverty trap. I characterize a necessary sequence of lump-sum taxes and transfers and show that this scheme will move the economy out of the poverty trap in finite time regardless of the economy's initial distribution of wealth. Unfortunately, I also show that neither basic democracy nor dictatorship can take the economy there with this policy scheme. The rationale for this is the following. The proposed escape route from poverty requires an economic input from the richer group. However, the shift in the decisive political influence during the path of development, from the hands of the poor to the hands of the rich, will put an end to this pro-poor policy scheme.