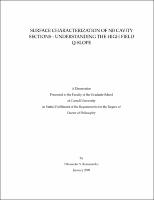 The high field Q-slope in niobium cavities was studied by analyzing the samples cut out from regions of strong and weak heating in the high magnetic field region of the cavity walls. A variety of surface tools were used: SEM/EDX, XPS, AES, EBSD, optical profilometry. Based on the surface analysis several possible primary sources of the high field Q-slope have been eliminated, such as roughness, niobium oxide, and foreign contaminants. The microcrystalline structure of the cavity samples was studied for the first time and the effect of the mild baking on the dislocation content was discovered. An alternative model to explain the HFQS and a mild baking effect is proposed, as suggested by results from this work. Defects that produced additional losses before the HFQS onset were also identified by thermometry and analyzed using the SEM. It was found that defects were pits.