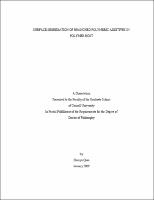 This study makes major contributions to understand the surface segregation of branched polymeric additives in linear polymer host by both simulation and experiments. Firstly self-consistent field(SCF) lattice simulation was used to study the entropic effect of architecture of polymer additives on their surface segregation in polymer host. A lot of typical molecular architectures, such as star, comb and dendrimer, together with their symmetry, had been theoretically investigated and symmetric star architecture was proved to be entropically the best candidate for surface migration, given that other properties such as chemical composition, molecular weight are constant(Chapter 2). Secondly, two series of symmetric star polystyrenes with different molecular weights, which are 4-arm and 11-arm stars were then anionically synthesized to provide experimental evidences for architectural effect. Surface tensions of star polystyrene melts were measured as a function of temperature and as a function of molecular weight using a modified Wilhelmy plate technique. We find that architectural effect plays a significant role in determining the molecular weight dependence on melt surface tension. A variable density lattice model that considers effects of entropic attraction of polymer chain ends to surfaces, compressibility and density gradients in the region near the surface is used to determine the origin of this observation. This analysis is complemented with surface tension calculations using more classical thermodynamic models that consider only bulk property changes with polymer architecture and molecular weight. These two models address different origins for such architecture effect but both provide a reasonably good quantitative estimation(Chapter 3). Finally these symmetric star polystyrenes were mixed as model additives with their linear counterparts, and the surface tension of the star/linear blend system were measured. We found that the star branched polymer tends to segregate at the surface, and the surface tension of the blends drops a lot from that of the linear component at low star weight concentration. Theoretical analysis and prediction of surface tension of pure component and blends were performed by both self-consistent lattice simulation and more classical bulk thermodynamic methods from Pressure-Volume-Temperature(PVT) information. We find that theory and simulation agree well with experimental results, at least qualitatively(Chapter 4).