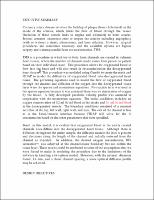 Coronary artery disease involves the buildup of plaque (from cholesterol) on the inside of the arteries, which limits the flow of blood through the vessel. Occlusion of these vessels leads to angina and ultimately to heart attacks. Several common treatments exist to reopen the arteries including angioplasty (with or without a stent), atherectomy, and laser ablation. However, surgical procedures are sometimes necessary and the available options are bypass surgery and transmyocardial laser revascularization, TMR. TMR is a procedure in which ten to forty 1mm channels are created in ischemic heart tissues, where the number of channels made varies from patient to patient based on their individual casesi. This procedure allows for oxygenated blood to flow into the heart and will also result in revascularization the deoxygenated heart tissuesi. This procedure was modeled using Gambit to create the mesh and FIDAP to model the diffusivity of oxygenated blood into deoxygenated heart tissue. The governing equations used to model the flow of oxygenated blood through the channel and diffusion of the oxygen into the deoxygenated tissue layer were the species and momentum equations. No reaction term was used in the species equation because it was assumed there was no elimination of oxygen by the tissue. A fully developed parabolic velocity profile was assumed in conjunction with the momentum equation. The initial conditions included an oxygen concentration of 0.2 ml 02/ml blood at the intake and 0.1 ml 02/ml blood in the deoxygenated muscle. The boundary conditions consisted of a constant zero flux at the top, left wall, right wall, and axis. The exit of the channel is free as is the blood/muscle interface because FIDAP will solve for the 02 concentration based on the other parameters that were specified. Based on this model, it is evident that oxygenated blood in the newly created channels does diffuse into the deoxygenated heart tissue. Although there is diffusion throughout the entire sample, the diffusion nearest the inlet is greatest and decreases along the length of the channel and radially outward from the channel as expected. In addition, the desired oxygen concentration, 80% saturationvii, was achieved at the channel-tissue boundary but not within the tissue layer. These results could be attributed to some of the assumptions that we were forced to make in modeling the procedure due to the limitations of the software in handling a two-phase model. However, with the optimal diameter found, 1.4 mm, and a closer channel spacing, a more optimal diffusion profile may be achieved.