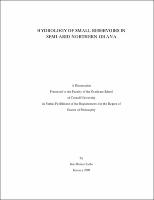 This thesis analyzes the suitability of radar satellite images for monitoring small reservoir surfaces, the suitability of remotely sensed time series of their surface areas to calibrate hydrological models, and small reservoir evaporation losses. Radar remote sensing of small reservoirs is suitable especially during the rainy season, but is affected by wind and lack of vegetation context during the dry season. Reservoirs could be extracted from the radar images most often with a quasi-manual classification approach, as stringent classification rules often failed under less than optimal conditions. Failure to extract reservoirs was due to the backscattered radar signal that occurred above wind speeds of 2.6 m s exp(-1) (Bragg scattering). Due to lower wind speeds, the use of night time acquisitions was more effective than the use of daytime images. As optical systems perform well under low vegetation contrast, and independent of wind conditions, radar and optical systems can be used complimentary. Time series of remotely sensed small reservoir surface areas, translated into storage volume changes, were successfully used to calibrate hydrological rainfall-runoff models. Eight small reservoirs in the Upper East Region of Ghana, and Togo, were monitored to calibrate modified Thornthwaite-Mather models, in which increasing precipitation leads to exponentially increasing contributing areas. The model results indicate that the overall impact of the reservoirs largely depends on the ratios of reservoir and watershed areas. For this two year study, the reservoirs captured on the average 34% of quick flow, and 15% of overall watershed runoff. Reservoir evaporation losses were measured directly with a floating evaporation pan (E sub(o) ) and were compared to evaporation rates determined from the reservoir?s energy budget (E sub(B) ) and Penman's equation (E sub(t) ). The direct E sub(o) measurements were generally lower than E sub(t) and E sub(B) . Compared to land based E sub(t) Land , the reservoir evaporation E sub(t) was not excessive. Regional wind patterns influence evaporation dynamics from the reservoir. Northeast winds with a high saturation deficit lead to significant evaporation losses, while the evaporation losses under moister, more prevalent southwest winds were moderate.