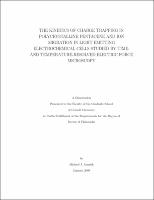 The microscopic mechanisms by which charges trap in organic electronic materials are poorly understood. While trapping and bias stress in thin film transistors have been investigated through bulk techniques, these efforts cannot account for the known local variations of trap concentration and kinetics across the film. We show that electric force microscopy (EFM) can be used to follow local trap formation kinetics in working pentacene thin-film transistors. The trap formation rate we found was hole-concentration dependent, strongly suggesting a trapping mechanism involving one or more chemical reactions, or at least, we hypothesize, an activated process. Chemically modified pentacene also shows concentration dependent trapping despite the presence of functional groups that should inhibit the proposed chemical trap formation mechanisms. Furthermore, we found that electrons, injected by gate voltage in modified pentacene and by light in unmodified pentacene, clear trapped charges. When the trapped holes are cleared by electron injection, there is an uncharged intermediate species remaining which accelerates future charge trapping. Finally, we use variable temperature to show direct evidence that the trapping mechanism is an activated process. In light-emitting electrochemical cells (LEECs) the redistribution of ions assists the injection of electronic carriers and leads to efficient light emission. The mechanism of operation of LEECs has been controversial, and there is no consensus regarding the distribution of electric field in these devices. Here, we use EFM to directly observe ion motion within the channel of an operating LEEC. Initial results in a planar configuration show ion migration on top of the electrodes. To properly test the models, the organic material was patterned solely between the electrodes. The observed ion motion agrees with the electrodynamic surface potential model: ions move to the electrodes to assist injection.