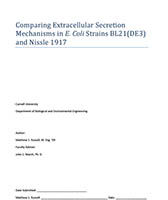 An important element of engineering probiotic bacteria for the treatment or prevention of disease is the organism?s ability to secrete useful concentrations of a drug, usually a protein produced from recombinant DNA. Achieving useful concentrations of secreted proteins in the gut of a patient may require maximizing secretion by a specific pathway or combining more than one pathway within a probiotic bacterium. In order to make informed decisions about how to attain desired secretion rates and amounts from a probiotic bacterium, we must understand the relative efficiencies and limitations of different secretion pathways within a specified probiotic bacterium. To this effect, this work examined the relative efficiencies of histidine-tagged glucagon-like peptide-1 (Glp1) secretion from two strains of Escherichia coli, Nissle 1917 and BL21(DE3), using a modified alpha-hemolysin (HlyA) secretion system and using a secretion tag for flagellin (FliC) [1,2]. These two secretion systems have been developed by Lee et al. and Majander et al. respectively. We looked into what effect controlling the HlyA secretion system from different promoters would have using PLac, an inducible expression promoter, and PT7, a promoter that recruits a high efficiency RNA polymerase. Preliminary results show that the HlyA secretion system is more effective in Nissle 1917 than the FliC system. They also show that controlling expression of secreted protein from PT7 increases secretion relative to control from PLac in BL21(DE3).