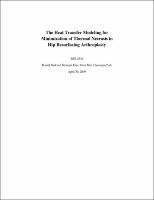 In the past, the only option for replacing broken or otherwise malfunctioning hip bones was total hip replacement (THR), which involved the removal of the body's natural hip joint and replacing it with an entirely synthetic joint. However, the complications involved with such extensive surgery have led to the push for less invasive therapies. One such idea that has gained popularity for younger patients is hip resurfacing arthroplasty (HRA), which focuses on repairing the joint rather than entirely replacing it. However, there are some issues with HRA, namely thermal bone necrosis due to the heat of polymerization during cement hardening. This paper examines this necrosis as well as the thermal trends of hip resurfacing surgery through the use of COMSOL, a computer aided engineering tool. In COMSOL, a 2D-axisymetric geometry was developed to model the leg bone, cement, ball, cap, and the hipbone. Boundary condition and initial condition was set to portray a realistic surgical environment. With the objective of minimizing bone necrosis, the model's parameters were adjusted to simulate a variety of material properties (different prosthetic material, and different bone conditions), as well as plausible surgical conditions (pre-cooled cement, and convective cooling). Sensitivity analysis was also conducted to gain a better understanding of the thermal tendencies of HRA. Based on the data from these simulations we were able to provide some insight into what approaches may be best for minimizing the extent of the thermal necrosis. The following paragraphs describe the most significant among these conclusions. First of all, we found that precooling the implant from room temperature to 5 degrees C resulted in a drop in the maximum temperature by 7 degrees C. It appears that precooling the cement in addition to the implant had no additional significant temperature reduction. Also, our sensitivity analysis revealed that our system was most sensitive to changes in precooling temperature. All of these factors seem to suggest that precooling may be an effective means for reducing thermal bone necrosis. Secondly, simulations of cancellous bone showed a maximum temperature lower than that of normal bone. As cancellous bone is typical of elderly patients, these results suggest that there is a lower risk of complications due to thermal necrosis during HRA for elderly patients than for younger individuals. Third, when varying our parameters, we often incurred computational failure due to the presence of "hot spots," small regions of the cement that reached extremely high values. Our sensitivity analysis revealed that our system at its default parameter values was extremely close to values that resulted in these hot spots. While it's questionable if these hot spot events are consistent with realistic physics, the topic deserves further investigation considered the potentially damaging results. While our model does not conclusively provide guidelines for reducing thermal necrosis, it does provide some ideas for successful prevention. Computational analysis as a first step helps us understand the thermal effects of HRA and sets the stage for subsequent experimentation.