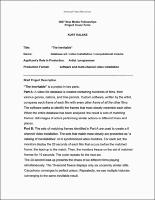 "The Inevitable" is a project in two parts: Part A: A video file database is created containing hundreds of films, from various genres, nations, and time periods. Custom software, written by the artist, compares each frame of each film with every other frame of all the other films. The software seeks to identify the frames that most closely resemble each other. When the entire database has been analyzed, the result is sets of matching frames: still images of actors performing similar actions in different times and places. Part B: The sets of matching frames identified in Part A are used to create a 6 channel video installation. The sets that match most closely are presented as "a catalog of inevitabilities" on 6 synchronized video monitors. For each set, the monitors display the 20 seconds of each film that occurs before the matched frame: the lead-up to the match. Then, the monitors freeze on the set of matched frames for 10 seconds. The cycle repeats for the next set. The 20-second lead-up presents the chaos of six different films playing simultaneously. The 10-second freeze displays only six uncannily similar stills. Cacophony converges to perfect unison. Repeatedly, we see multiple histories converging to the same inevitable result.