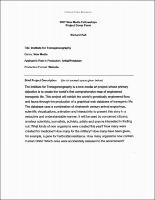 The Institute for Transgeneography is a new media art project whose primary objective is to create the world's first comprehensive map of engineered transgenic life. This project will exhibit the world's genetically engineered flora and fauna through the production of a graphical web database of transgenic life. The database uses a combination of nineteenth century animal engravings, scientific visualizations, animation and interactivity to present this story in a seductive and understandable manner. It will be used by concerned citizens, amateur scientists, journalists, activists, artists and anyone interested in finding out: What kinds of new organisms were created this year? How many were created for medicine? How many for the military? How many have been given, for example, a gene for herbicidal resistance. How many organisms now contain human DNA? Which ones were accidentally released to the environment?