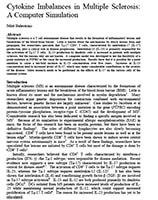 Multiple sclerosis is a T cell autoimmune disease that results in the formation of inflammatory lesions and breakdown of the blood-brain barrier. Little is known about the mechanisms by which lesions form and propagate, but researchers speculate that TH-17 CD4+ T cells, characterized by interleukin-17 (IL-17) production, play a critical role in disease progression. Interleukin-23 (IL-23) is primarily responsible for the activation of TH-17 T cells. IL-23 production by dendritic cells is increased in patients with multiple sclerosis, but the reasons why are not known. A computer model was developed to test the feasibility of a point mutation in PTPRC as the cause for increased production. Results show that it is possible for a point mutation to cause a ten-fold increase in IL-23 concentration over five years. Increases in IL-23 concentration lead to increased levels of IL-17, which may make considerable contributions to the severity of the disease. More research needs to be performed on the effects of IL-17 on the various cells of the immune system.