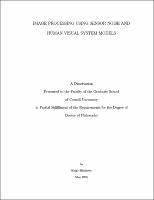 Because digital images are subject to noise in the device that captured them and the human visual system (HVS) that observes them, it is important to consider accurate models for noise and the HVS in the design of image processing methods. In this thesis, CMOS image sensor noise is characterized, the chromatic adaptation theories are reviewed, and new image processing algorithms that address these noise and HVS models are presented. First, a method for removing additive, multiplicative, and mixed noise from an image is developed. An image patch from an ideal image is modeled as a linear combination of image patches from the noisy image. This image model is fit to the image data in the total least square (TLS) sense, because it allows uncertainties in the measured data. The image quality of the output image demonstrates the effectiveness of the TLS algorithms and improvement over existing methods. Second, we develop a novel technique to combine demosaicing and denoising procedures systematically into a single operation. We first design a filter as optimally estimating a pixel value from a noisy single-color image. With additional constraints, we show that the same filter coefficients are appropriate for demosaicing noisy sensor data. The proposed technique can combine many existing denoising algorithms with the demosaicing operation. The algorithm is tested with pseudo-random noise and noisy raw sensor data from a real digital camera, and the proposed method suppresses CMOS image sensor noise while effectively interpolating the missing pixel components better than when treating demosaicing and denoising problems independently. Third, the problem of adjusting the color to match the digital camera output with the scene observed by the photographer?s eye is called white-balance. While most existing white-balance algorithms combine the von Kries coefficient law and an illuminant estimation techniques, the coefficient law has been shown to be an inaccurate model. We instead formulate the problem using induced opponent response theory, the solution to which reduces to a single matrix multiplication. The experimental results verify that this approach yields more natural images than traditional methods. The computational cost of the proposed method is virtually zero.