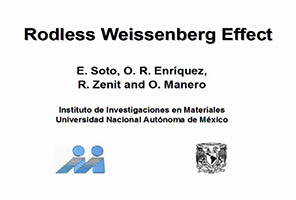 The climbing effect of a viscoelastic fluid when stirred by a spinning rod is well documented and known as Weissenberg effect(Wei et al, 2006). This phenomenon is related to the elasticity of the fluid. We have observed that this effect can appear when the fluid is stirred without a rod. In this work, a comparison of the flow around a spinning disk for a Newtonian and a non-Newtonian liquids is presented (see Video). The flow is visualized with ink and small bubbles as fluid path tracers. For a Newtonian fluid, at the center of the spinning disk, the fluid velocity is directed towards the disk (sink flow); on the other hand, for a viscoelatic liquid, a source flow is observed since the fluid emerges from the disk. The toroidal vortices that appear on top of the disk rotate in opposite directions for the Newtonian and non-Newtonian cases. Similar observations have been reported for the classical rod climbing flow (Siginer, 1984 and Escudier, 1984). Some authors have suggested that this flow configuration can be used to determine the elastic properties of the liquid (Escuider, 1984 and Joshep, 1973).