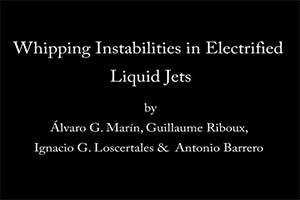 A liquid jet may develop different types of instabilities, like the so-called Rayleigh-Plateau instability, which breaks the jet into droplets. However, another type of instabilities may appear when we electrify a liquid jet and induce some charge at his surface. Among them, the most common is the so-called Whipping instability, which is characterized by violent and fast lashes of the jet. In the submitted fluid dynamic video we will show an unstable charged glycerine jet in a dielectric liquid bath, which permits an enhanced visualization of the instability. For this reason, it is probably the first time that these phenomena are visualized with enough clarity to analyze features as the effect of the feeding liquid flow rate through the jet or as the surprising spontaneous stabilization at some critical distance to the ground electrode.