THE AESTHETICS OF AUTHORITY: EMOTIONS, DEVOTION AND POWER IN THE SINHALA BUDDHIST LITERATURE OF MEDIEVAL SRI LANKA 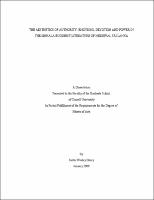 The project examines the continuities and divergences in aesthetic philosophy from Pali Buddhist and Sanskrit literature to that of medieval Sri Lanka. Special attention is given to the association of moral authority with the capacity for literary and artistic production, and the means by which persons are so entitled. The project concludes with reflections on the political significance in medieval Sri Lanka of the contiguity of these themes, as well as that of the conflation the personage of king with the Buddha.