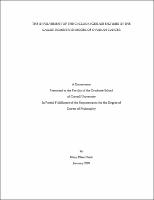 The main objective of the work presented was to determine if the cyclooxygenase (COX) enzymes are involved in ovarian carcinogenesis in the hen as a model for the human disease. The expression patterns of COX-1 and -2 mRNA and protein in normal hen ovaries and hen ovarian tumors were determined. COX-1 mRNA expression was significantly increased in ovarian tumors of the hen while there was no difference in COX-2 mRNA expression in normal hen ovaries as compared to ovarian tumors. COX-1 protein localized to glandular areas of ovarian tumors and a significant increase in prostaglandin E2 (PGE2) in ovarian tumors indicated that the increase in COX-1 mRNA represented a functional increase. The expression of COX-1, COX-2, and vascular endothelial growth factor (VEGF) mRNA and protein were also determined in ascites cells collected from hens with ovarian cancer. VEGF was previously associated with COX-1 expression in human ovarian cancer and is implicated in the etiology of ovarian cancer, including ascites formation. We found a significant increase in VEGF mRNA in ascites cells collected from hens with ovarian cancer as compared to normal hen ovaries and a correlation between ascitic VEGF mRNA expression and ascites volume. VEGF protein was expressed in ascites cells and also localized to glandular areas of ovarian tumors. We found no indication that treatment with COX inhibitors decreased VEGF expression, but our data show that ascites cell proliferation could be decreased using a nonspecific (aspirin) or a COX-1 specific inhibitor, while equivalent concentrations of a COX-2 specific inhibitor were ineffective at decreasing proliferation. Finally, the effect of feeding hens a diet containing aspirin (a common COX inhibitor) on ovarian cancer incidence and/or progression was determined. We found a significant effect of aspirin treatment on the stage of ovarian cancer, which indicates that inhibition of the COX enzymes may slow the progression of the disease. These combined data suggest that the COX enzymes, in particular COX-1, contribute to ovarian carcinogenesis in the hen, which supports data in women. The hen, therefore, may be the ideal spontaneous in vivo model for studies involving the COX enzymes and ovarian cancer.