THE IMPACT OF FISCAL DECENTRALIZATION ON GROWTH, INEQUALITY AND LOCAL GOVERNANCE IN RURAL CHINA 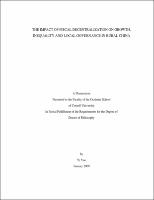 This dissertation investigates empirically the consequences of recent fiscal policy changes on China?s rural development. It uses a county-level dataset covering over 90 percent of rural counties and a period of 13 years since 1993, in which China started to experience a series of fiscal reforms to decentralize government expenditures and authority to local governments. After a brief introduction in the first chapter, the second chapter assesses the dynamic changes in GDP and fiscal resource distributions from 1993 to 2005. In particular, it focuses on how the coastal-inland gap, the between-province gap, and the gap between poor and non-poor counties contribute to the growth of inequality by devising a decomposition approach in a multi-tier hierarchical economy. It is shown that the inland gap between poor and non-poor is larger than the coastal gap in GDP, but smaller in public spending. This suggests that fiscal equalization policies, though effective in equalizing public service provision, failed to equalize income in inland areas. The third chapter explores the incentive mechanism of intergovernmental grants. It brings a single-threshold linear-spline model to the data of 2002 and reveals a non-linear relationship between grants and recipients? local revenues. The finding supports the argument that grants, though increasingly used as a policy device to reduce fiscal disparity, have produced an anti-equalization effect favorable to urban recipients with larger revenues and induced rent-seeking in rural recipients with less revenues. The fourth chapter assesses the extent to which county level governments compete for capital investment and the determinants of their behavior. It initiates an approach using Moran?s I statistics to investigate tax competition behavior between units that are both geographically connected and relatively small in size. Contrary to the regression approach, it finds tax competition behavior is not globally uniform. Instead, counties with favorable endowment in coastal areas tend to race to the bottom by lowering tax rates, while counties within a poorly endowed neighborhood in interior areas have a greater propensity to run a ?race to the top tax rate?. This result predicts a trend toward polarization, which may challenge the convergence view in growth economics.