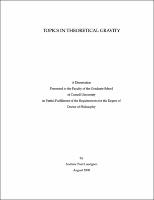 This dissertation presents four topics dealing with various aspects of gravitation, from theoretical matters to practical issues. Chapter 2 is about the quasilocal energy, which is a mathematical tool for defining gravitational energy. We extend previous definitions so that they are valid within the event horizon of a black hole. We find that the energy at the center is finite rather than divergent, indicating that the nonlinearities of General Relativity cause a sort of renormalization. We explore a number of examples and point out a problem with some positivity theorems for this type of energy. Chapter 3 considers the thermodynamics of a charged black hole in a canonical ensemble. We calculate the thermodynamic phase diagram of a black hole with a fixed temperature and charge that is confined in a cavity. We show that the phase diagrams possess the same features as an AdS black hole, suggesting that results such as the AdS/CFT conjecture are at least approximately valid for the more realistic scenario of a black hole in a cavity. Chapter 4 is about the measurement of gravitational radiation. Laser interferometeric observatories are now in operation that can in principle detect some likely astrophysical sources. We study the hyperboloidal family of light beam shapes that have the potential of reducing the thermal noise and therefore increasing the sensitivity to gravitational waves. We show that finite mirror effects are significant and show that small changes in the mirror shape can substantially decrease the thermal noise, increasing the detection range of such observatories. Chapter 5 explores a modified theory of gravity called F(R) gravity which was proposed to solve the dark energy problem. We consider forms of F(R) that are intended to mimic standard General Relativity at high densities, but have low-density behavior that can explain the observed acceleration of the cosmological expansion. We discuss the chameleon mechanism for suppressing deviations from standard GR and show that it requires a fine-tuning to function, hence generic F(R) models without such fine-tuning are ruled out by Solar System and cosmological observations.