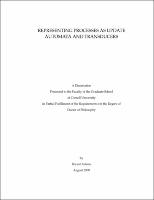 In 2007 Nerode introduced the notion of an update automaton and update transducer to model the evolution of interactions of arbitrary functions on arbitrary domains governed by a finite automaton. We show the scope of this methodology by modeling a variety of processes, including database networks, interactive proofs, finite-state transducers, and financial ledgers. We produce a novel solution method and associated transducers for finite systems of arbitrary-order non-homogeneous linear difference equations over a field using Hermite's unimodular polynomial matrix row reduction. These transducers can be viewed as time invariant linear causal maps of the linear space of sequences of vectors over the base field.