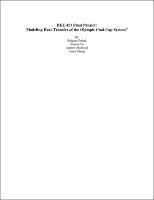 Hypoxic-ischemic encephalopathy (HIE), or brain damage due to low blood flow and oxygen deprivation, causes 6 deaths per 1,000 births (Long and Brandon 293). HIE can be caused by cord prolapse, abruptio placentae, maternal hypotension, and asphyxia due to shoulder dystocia, but many times the cause is unknown. The Olympic Cool-Cap system (OCCS) from Natus Medical Inc. was developed to treat HIE in asphyxiated newborn by selectively cooling the brain temperature while maintaining body core temperatures between 34 - 35?C. We modeled this heat-transfer process in the infant head using COMSOL Multiphysics. Our results showed that the gray matter temperature changes by 7oC, while the inner brain temperature remained relatively close to the core temperature. The majority of the cooling occurred at the surface and skull of the head primarily due to the high blood-perfusion of the inner brain. However, the average overall brain temperature still reached 33.45oC, which has been shown in animal studies to be within the therapeutically effective temperature range to treat HIE. Our results suggest that the OCCS has been clinically effective by uniformly cooling the surface of the brain, even though the deep brain remains essentially constant.