Design of Transmucosal Patch for Fentanyl Delivery to Cancer Patients 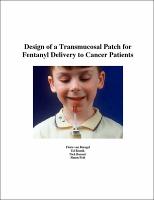 Fentanyl is an analgesic that is about 80 times more potent than morphine. It is administered as a transdermal patch for chronic pain relief and as an oral transmucosal lozenge for breakthrough pain relief which is often experienced by cancer patients. The latter administration, under the brand Actiq? exploits the higher permeability of buccal mucosa to achieve a much faster onset. We developed a model of a transmucosal patch as an alternative to existing designs, in order to achieve faster pain relief, improved dosage efficiency, and greater pharmacokinetic control via an impermeable layer. We simplified the design in to 1D model with diffusion and a reaction rate, which simulates uptake fentanyl into the blood. After implementing the model in COMSOL, we calculated the pharmacokinetic profile of fentanyl in the plasma over time with first order linear non homogenous equation. Our resultant profile peaks at 20 minutes and matches Actiq??s profile. A sensitivity analysis yielded that the plasma elimination rate of fentanyl, the epithelium diffusivity and the diffusivity, thickness and distance of the impermeable layer all had a significant affect on the time to peak. A second sensitivity analysis determined that the initial concentration and diffusivity, thickness and distance of the impermeable layer had the greatest influence on peak fentanyl concentration. In conclusion, we believe that a transmucosal patch is a viable design alternative for fentanyl delivery due to it?s a rapid onset and the potential for diffusive control with the impermeable layer. Further exploration is recommended to evaluate.