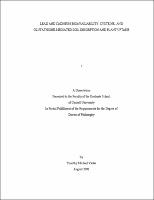 The use of plants in phytoremediation is limited by incomplete knowledge of transport mechanisms and low solubility of metals in soil. I have investigated the use of biogenic thiols cysteine and glutathione to chelate Pb and Cd in soils and to create a soluble metal-thiol species that may be actively transported into plants. Short-term hydroponic experiments revealed that both cysteine and glutathione mediate uptake of Pb and Cd into roots of Zea mays and Brassica napus. Uptake rates were enhanced after pre-exposure to cysteine or glutathione and inhibited in the presence of vanadate, suggesting a biological mechanism of uptake. Increasing concentrations of glutathione resulted in decreasing Pb uptake rates, which indicates competition for transport between the free glutathione and Pb-glutathione species. Pb uptake in the presence of increasing cysteine concentrations resulted in decreased uptake initially but linearly increasing uptake at higher thiol concentrations. Uptake is possibly mediated by a peptide or amino acid transporter. While cysteine and glutathione mediate uptake of Pb into roots, shoot translocation was not significant in wildtype B. napus, Z. mays or Arabidopsis thaliana. Experiments with A. thaliana tDNA insertion mutants deficient in OPT, PTR, or PDR transporters showed changes in root Pb accumulation as well as increased shoot translocation in the OPT5 knockout. Root vacuolar sequestration may be occurring and will be verified in future experiments using TEM and x-ray spectroscopy. Cysteine and glutathione are both effective at solubilizing Pb and Cd from several contaminated soils at pH 7 and 8. While glutathione is relatively stable in solution and maintains metal solubility, cysteine is rapidly oxidized resulting in short-lived solubility of metals. Sequential extractions showed that cysteine and glutathione removed from 20 to 100 % of the soil metal contaminant after 4 cycles depending on the soil. In intact soil systems, Pb and Cd solubility ranged from 20 to 200 ppm due to thiol treatment, while Cd solubility was less than 10 ppm. Root and shoot uptake of Pb and Cd from soil into Zea mays did not result in significantly higher uptake than the control, but these initial experimental methods were inconclusive.