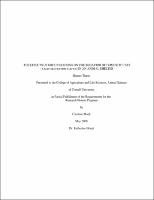 This study investigates the effects of group housing on the stress and behavior of domestic cats in an animal shelter. Twenty-four cats one-year of age and older were observed in the Tompkins County SPCA for three consecutive days. All behavior was continuously recorded. Density of cats in the room and length of stay at the shelter were also recorded. To measure the effects of group housing on a cat?s behavior in relation to humans, a temperament test was performed each month for four months on a separate group of twenty-nine cats from the Tompkins County SPCA. A reduction in stress was noted in cats staying in the shelter for over 8 months. These cats had a reduced ratio of negative (aggressive or defensive) interactions to total interactions, slept a more normal amount, and did not have inhibited grooming or movement. The number of cats in the room was correlated with an increased activity level and decreased sleep, because larger rooms had more human traffic. Negative interactions were positively correlated with time spent eating, indicating that cats had to stop avoidance behavior in order to reach the communal food bowl. The score the cat received on the temperament test did not vary significantly between test months. Results indicate that the entry to the shelter environment is stressful, and the adjustment to group housing takes over 8 months. A four month stay in group housing did not seem to affect the temperament of a cat in relation to its behavior towards humans.