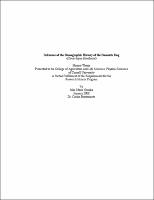 The domestic dog (Canis lupus familiaris), the oldest domesticated species, has a unique demographic history through its domestication from the gray wolf (Canis lupus) and in the formation of behaviorally and morphologically diverse dog breeds. Using information contained in the site frequency spectrum of purebred dogs and the Poisson Random Field framework, we infer the demography of the dog at domestication, in the formation of individual dog breeds, and of several wild canid populations. First, we find evidence for a slight contraction in population size approximately 15,000 years ago during the domestication of the dog. As these results may be an artifact of using breed dogs to infer a pre-breed dog population, it is likely that continued introgression between dogs and wolves or multiple domestication events have maintained high levels of dog diversity. Demography in the formation of several dog breeds is also examined, where the relatively rare breeds of the Bernese Mountain Dog and Pekingese appear to have gone through the most severe population contractions. In contrast, less severe contractions are found for the Golden and Labrador Retrievers, both popular breeds, and the Akita, which has likely introgressed with wolves. Finally, we examine data from several wild canid populations, finding evidence for population contractions in the gray wolf populations of Spain and Israel, but none in North American populations or coyote. We have developed a more comprehensive picture of the domestic dog?s demographic history, which can prove useful in its application to other studies of the domestic dog currently underway.