FUNCTION OF JNK2 AND MYD88 DURING TOXOPLASMA GONDII INFECTION 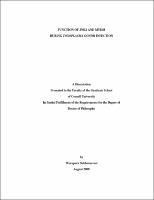 The intracellular protozoan parasite Toxoplasma gondii infects humans and other warm-blooded animals. Understanding the pathogenesis of infection and immunity to the parasite is important since this pathogen is capable of causing fatal disease in immunocompromised hosts. T. gondii infection elicits IL-12 release from innate immune cells, resulting in high level IFN-g production. This confers resistance to infection through T cell dependent Type I immunity. Signal transduction pathways involved in IL-12 production, a little understood area, are the major focus of this dissertation. Neutrophils are innate immune cells capable of IL-12 production during T. gondii infection. I found that JNK2 MAPK is the major isoform expressed in mouse neutrophils. My results show that JNK2 plays a major role in PMN IL-12 and CCL/MCP-1 production during in vitro parasite stimulation. Neutrophil chemotaxis was also partially dependent upon JNK2, whereas oxidative burst and phagocytic activities were not affected by absence of this MAPK protein. I examined the role of JNK2 in response to T. gondii infection in vivo. I found that JNK2 plays a role in T. gondii-induced immunopathology since absence of JNK2 contributed to enhanced disease resistance associated with alleviated pathology in the small intestine and decreased neutrophil recruitment at this site. Surprisingly, and in contrast to my in vitro data, JNK2 negatively regulated IL-12 production during in vivo infection. Toll-like receptor adaptor protein MyD88 is important for IL-12 induction during Toxoplasma infection. During oral T. gondii infection, I found that MyD88 was essential for controlling parasite burden leading to disease resistance. In addition, I found that neutrophil recruitment and expression of IGTP, a molecule required for control of infection, was also dependent upon MyD88 signaling. Interestingly, while IL-12 was greatly diminished in the absence of this molecule, T cell dependent IFN-g responses were nevertheless generated. Importantly, I found that MyD88 was not required for development of protective immunity to T. gondii. Thus, while MyD88 signaling was required for microbicidal control of infection, it was not necessary for initiation of adaptive immunity to this parasite. In summary, this dissertation elucidates the complex roles of JNK2 and MyD88 signaling pathways in IL-12 production and resistance to Toxoplasma infection. Investigating the functions of these molecules in response to T. gondii contributes to a clearer understanding of the immunopathogenesis of infection with Toxoplasma and other microbial pathogens.