MECHANISMS FOR THE STRUCTURAL ACTIVATION OF THE SMALL G PROTEIN CDC42 AND ITS CONSTITUTIVELY ACTIVATED MUTANT, CDC42 (Q61L) 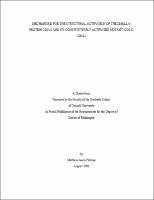 The x-ray crystal structures for the GTP-bound forms of the small G protein Cdc42 and its constitutively activated isoform, Cdc42 (Q61L), were previously unkown. The mechanism for the activation event has been largely assumed based on x-ray crystal structures for effector-bound-Cdc42 complexes as well as mechanisms for activation for other small G proteins such as Ras. We used x-ray crystallography, tryptophan fluorescence, and 31P-NMR to study the specific activation event for Cdc42. The x-ray crystal structure revealed a signaling-active GTP-analog-bound Cdc42 conformation that was virtually identical to the conformation for signaling-inactive GDP-bound Cdc42 (1ANO). It was further revealed through the use of tryptophan fluorescence, as well as 31P-NMR, that binding of an effector protein played an important part in inducing a conformational change that resulted in the fully activated structure usually associated with activated G proteins. Conversely, we used x-ray crystallography to reveal that the constitutively activated isoform of Cdc42, Cdc42 (Q61L), did not require an effector protein to adopt a fully activated structure. 31P-NMR results confirmed these findings and also revealed that the GTP-analog, GMP-PCP, behaved similarly to the physiologically relevant nucleotide, GTP, during the activation event. Overall these findings imply that a spectrum of activation mechanisms exist for small G proteins where, on the one end, an effector protein is required to induce the proper activated conformation (i.e. Cdc42), and on the other end, GTP binding is sufficient to drive the G protein to the fully activated structure (i.e. Ras).