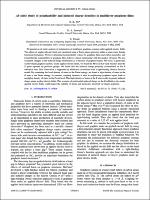 The original published version of this article may be found on the Physical Review B website: http://dx.doi.org/10.1103/PhysRevB.77.195406 Copyright (2008) American Physical Society