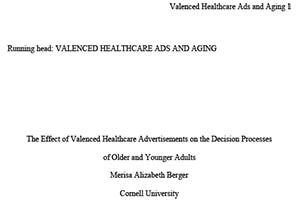 This study explored how healthcare advertisements presented in a positive or negative manner could affect memory, preferences, and persuasiveness for older and younger adults. Based on previous research showing older adults? increased sensitivity for positive information, I hypothesized that older adults would exhibit greater memory, have greater preferences for, and be persuaded more by the positive ads versus the negative ads, while the younger adults would exhibit no differences between the positive and negative ads. In the present study, older and younger participants viewed twelve valenced advertisements that covered six health care domains. In response to these ads, both age groups rated them on likelihood to choose the item in the ad, likelihood to seek more information, and the persuasiveness of the ad. Later their memory for the product name associated with each ad slogan was tested. Lastly, the participants rated each ad on how positively and negatively the ad made them feel. Overall, the younger adults were more likely to choose the products and were more persuaded by the ads relative to the older adults. The data also revealed that older and younger adults preferred, were more persuaded by, and better remembered the positive ads compared to the negative ads. These findings suggest that positively valenced ads in the healthcare domain may be the most effective way to convey health related information.