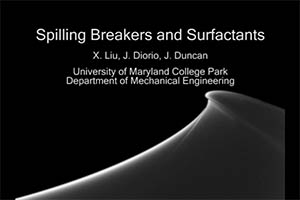 Weakly Breaking Waves in the Presence of Surfactant Micelles

Mechanically generated weakly breaking waves were studied experimentally in clean water and in water with a soluble surfactant whose bulk concentration is above the Critical Micelle Concentration (CMC). For the surfactant case, the breaker, which forms a surface-tension-dominated spilling breaker in clean water (wave frequencies 1.42 to 1.15 Hz, see Duncan et al. Journal of Fluid Mechanics Vol. 379, pp. 191-222, 1999), ranges from a spiller at the highest frequency to an overturning wave with a plunging micro-jet at the lowest frequency. This behavior is consistent with that of a wave in a pure liquid with a lower surface tension rather than a wave in water with the same low surface tension created by a surfactant with a bulk concentration below the CMC. The analysis of the geometrical characteristics of the breaking surface generated by the jet impact on the front face of the wave crest indicates a patch of more violent turbulence than would be present without the surfactant. Further detail can be found in "Weakly Breaking Waves in the Presence of Surfactant Micelles", X. Liu, J. H. Duncan, Physical Review E, Vol. 76, No. 6, December, 2007.