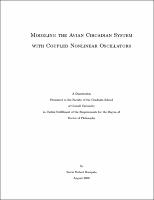 In this dissertation we propose several different qualitative mathematical models for the circadian system of the Japanese quail and investigate the dynamical behavior exhibited by each model via perturbation methods and numerical integration. Each model consists of two identical nonlinear oscillators and a third, detuned nonlinear oscillator. The identical oscillators are indirectly coupled via the third oscillator, that is they form a 3-oscillator chain. The first model consists of three weakly coupled and detuned weakly-nonlinear (epsilon << 1) van der Pol (VDP) oscillators. The coupling and detuning in this system are considered "weak" as they are O(epsilon). We then propose two coupled phase oscillator models suggested by, but not derivable from, the VDP model. The second phase oscillator model is a generalization of the first. Next we return to the VDP model but now consider the coupling and detuning as "strong" as they are O(1). Finally, we make a mathematical aside by investigating the presence of a 3:1 internal resonance in a system of two strongly coupled and detuned VDP oscillators. The motivation for this work comes from the presence of circadian melatonin rhythms in the eyes of Japanese quail. Recent experiments showing these rhythms to be in-phase with each other and stable have strengthened the hypothesis that the eyes are the location of the central pacemaker for Japanese quail. We model these rhythms as the identical nonlinear oscillators, while the "extra-ocular" circadian system is modeled by the third oscillator. Mathematically we identify these stable phase-locked in-phase biological ocular melatonin rhythms with stable phase-locked in-phase modes for each model under study and then investigate the existence and stability of such motions for some set of parameter values. If such motions exist for a model we conclude that the model in question exhibits behavior similar to that of the experiments. In particular, our models suggest that the uncoupled ocular melatonin rhythms should have a higher frequency than that of the extra-ocular circadian system. This result suggests a possible measurement to be made by experimental biologists.