THE INFLUENCE OF ORTHOGRAPHY ON AUDITORY SPEECH PERCEPTION IN AMERICAN ENGLISH: EVIDENCE FOR INDIVIDUAL DIFFERENCES 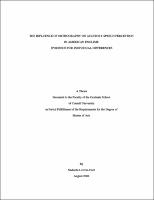