"THIS MYSTERIOUS MIASMA": ENVIRONMENTAL RISK, EDITH WHARTON, AND THE LITERATURE OF BAD AIR 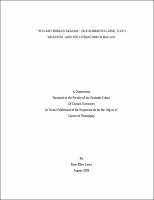 "This Mysterious Miasma" is a critical study of the literary and cultural history of American miasma from 1865-1995. I begin with an analysis of Roman fever in Henry James' Daisy Miller and Nathaniel Hawthorne's The Marble Faun. I argue that American anxieties about Roman fever were consistently intertwined with concerns about the corrosion of literary value. This twining of literary and miasmic concerns does not end when what science historian Peter Thorsheim calls "the miasma era" concludes in the 1890s. Indeed, I argue that literary criticism has been too quick to take bacteriology at its word, misreading the scientific ascendancy of germ theory as evidence of a parallel metaphoric ascendancy. These misreadings overlook the presence of a pre-bacterial rhetoric in post-bacterial America. As recent social histories of hygiene and sanitation have suggested, early twentieth century domestic reformers, principally women, retained the miasmic narratives bacteriology denounced, investing bad air with complex gendered meaning; I argue that this investment is also crucial to environmental language in early twentieth century fiction. To make this point, I focus on Edith Wharton, whose work is a fertile source of what I call the miasmic hypothesis--the proposition that female subjects are shaped by the environmental risks which make them legible in the first place. Through readings of bad air in Wharton's canonical fiction, including The House of Mirth and "Roman Fever," as well as her minor fiction, Sanctuary and Twilight Sleep, I demonstrate that her environments pose both aesthetic and physical risks, and that her characters come into relief according to their technique for negotiating the competing demands of different kinds of risk. My final chapters describe the rhetoric of bad air at work in late twentieth century legal and epidemiological discussions of gender and sexuality. I elaborate the political stakes of miasma narratives in environmental illness, which I discuss in the context of Todd Haynes' 1995 film Safe. I also analyze the language of the hostile work environment in sexual harassment law. Ultimately, I conclude that current miasmic rhetorics tend to obfuscate rather than articulate the gendered complexities of psycho-social interaction, and thus become harmful to the causes of social justice they were designed to address.