The Cost of Living in Poverty: Long-Term Effects of Allostatic Load on Working Memory 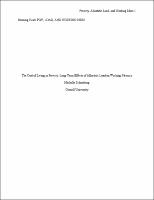 Compared to their middle-income peers, adolescents reared in poverty perform less accurately on neurocognitive tasks. Previous research has not delineated an underlying mechanism that would account for these deficits in cognition. Allostatic load is a likely contributor as physiological stress in the brain disrupts neurogenesis, decreases the connections between dendrites, and induces atrophy in areas essential for working memory. The interplay between poverty, allostatic load, and working memory has not been previously studied. The current investigation examines the influence of cumulative, physiological "wear and tear" (at ages 9 and 13) on working memory functioning (at age 17), in a low- and middle-income sample (N= 68 and 102 per group, respectively). As predicted, proportion of life spent in poverty was inversely related to working memory functioning, with decreased accuracy for individuals living in persistent poverty. This pathway was fully mediated by increased allostatic load in childhood and early adolescence. These findings have implications for future health and education policies, and have provided preliminary evidence for the role of allostatic load on neurocognitive functioning.