The Impact of Disorder on Supersolidity in Solid Helium-4 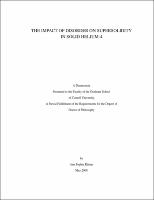 This dissertation explores the nature of an anomaly in solid helium which has been referred to as supersolid: A supersolid state of matter, i.e. a solid with crystalline structure that exhibits frictionless superflow, was theoretically proposed to occur in solid helium-4 almost 40 years ago \cite{Andreev1969,Chester1970}. The first experimental indication for the existence of supersolidity in helium 4 was brought forward in 2003 when Kim and Chan employed the torsional oscillator technique to observe nonclassical rotational inertia (NCRI) \cite{Kim2004a,Kim2004}. The aim of this thesis is to characterize the link between the observed nonclassical behavior in solid helium and crystalline disorder and to place constraints on current theoretical models. In the first part, the thermal history of helium crystals was varied and its impact on the NCRI was studied in a torsional oscillator. When the helium crystal is annealed, i.e. warmed to a temperature below but close to the melting temperature and held there for several hours, the supersolid signal was substantially reduced. Sometimes, the NCRI was decreased below the detection threshold which is given by the period resolution of 0.05\% of the inertia of the solid sample \cite{Rittner2006}. During the annealing process, pressure relaxations by several bar were observed with a time scale of hours which were interpreted as the degree of disorder in the sample \cite{Rittner2006a}. Additionally, the freezing speed was increased by performing quench cools which were done by heating the sample rapidly while leaving the dilution refrigerator cold. These cool downs resulted in bigger signal sizes and higher sample pressures \cite{Rittner2007}. Secondly, helium samples were confined to cylindrical and annular cells of varying widths. The NCRI was found to increase by three orders of magnitude with increasing restriction \cite{Rittner2007} and exhibits a broad maximum for thin annuli of 100 $\mu$m width with a signal size around 20\%. Further constraint to channels in porous materials, for example vycor glass and porous gold, decreases the signals sizes again to 1\% \cite{Kim2008}. In a highly constraint cell with a radial confinement of 74 $\mu$m, Kim and Chan's finding that the flow is strongly suppressed when the cell is blocked \cite{Kim2004a} was confirmed. In order to characterize the confined helium samples with high supersolid fractions the solid pressure was measured in an equally confined pancake cell with a gap of 100 $\mu$m. The pressure could be fitted to the functional form p = $p_0+a T^2 +b T^4$ which indicates the coexistence of both phonon contributions and glassy regions in the sample. The sample pressure relaxed at all temperatures which lead to a reduction of the glassy term. The time constant of the relaxation decreased and the relaxation was slower at low temperatures.